We added a new product, the Maklad - Water Mist.
A Product folder (pdf, 65kB) is prepared for download: > here <

I am happy to announce our new company location and phone/faxnumber:

On 28th of November 2007 the presentation of the prizes happened at the pollutec fair, the biggest environmental fair in france.
Maklad-Fluid won the Bronze Award.
The Silver Award was gained by SkySails from Germany, and the Gold Award by NANOVIS from Switzerland.

Click at the image above or > here < to go to the gallery.

Maklad at the POLLUTEC fair in Paris

Innovation in Waste Water Inactivating
The MAKLAD Eco-Lyser Continuous Wastewater-Inactivating-Plant has been nominated by the Austrian Jury for the EEP European Environmental Press Award 2007.
The Austrian Minister for Environment Dr. Josef Pröll and the Vice Governor for Environment of the Austrian Federal State of Lower Austria, D.I. Josef Plank will award the national nomination of this outstanding, innovative Technology during a celebration 19. June 2007 in St. Pölten/Austria. 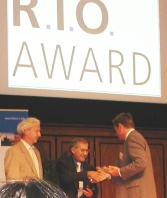 "The Aachen Foundation Kathy Beys stands for preserving the Natural Basics of Life.
If we wish to preserve our chances to live and labor for future generations as well, we have to pass our Planet to them somehow intact, by starting where the material exchange between man and nature takes place: in the economy.
Which means, man has to reduce the immense flows of the masses which the developed people’s economies need to put in motion for the creation of their prosperity.
There is no shortage in convincing concepts and statements for a future optimistic, modern and prospering economy.
To bring out these concepts from the niche of experts into the public eye, is the goal of the Aachen Foundation Kathy Beys.
To show that a sustained economy – an R.I.O. economy, which handles it’s resources effectively and intelligently – not only keeps our Planet in balance, but also secures the economy in the long run….. This is the foundation’s goal and link to the R.I.O Innovation Price [……]

www.faktor-x.info - the web-portal of the Aachen located foundation Kathy Beys

Copyright © 2021 by WWW.MAKLAD-FLUID.COM and powered by BRANDAUER IT-SERVICES and QUALITY WEBSERVICES.